PICTURE PAST: What made the headlines 50 years ago this week?

There were queues at supermarkets as shoppers tried to get their hands on cigarettes during a 'price war'. The story was reported 50 years ago in the Weston Mercury and Somerset Herald.

Somerset headteacher and governor step down

Two long-standing members of a primary school team have stepped down from their roles.

Tea dance at the Winter Gardens for Age UK Somerset

A social tea dance for Age UK Somerset will take place in October.

A memorial service for 23 men who died in World War Two was held in Weston-super-Mare.

A cruise ship made a rare appearance off the coast of Weston-super-Mare, when it docked at Steep Holm island.

An open day in Worle gave people the chance to have their say on what they would like to see happen and improved where they live.

The war memorial in Worle has been refurbished in time for the commemoration of World War One in November.

A new Costa Coffee drive-thru is opening at a service station along the M5.

Picture Past: September 20, 1968 - Not enough phone equipment to be installed

A shortage of telephone equipment and vandalism made headlines in the Weston Mercury and Somerset Herald 50 years ago. Here is the news from the September 20 edition.

The candidates running in a by-election in North Worle have been announced this week.

A 'nationally important' original work by a Weston-super-Mare artist will go on display in the town for the first - and possibly only - time in its history.

An elderly woman was left with cuts and bruises after being pushed to the floor by a man who robbed her in Worle.

Changes to Weston's Grand Pier and the rediscovery of lost memorial tablets made headlines in the Weston Mercury and Somerset Herald 50 years ago. Here is the news from the September 13 edition.

A tyrannosaurus rex roamed freely around a Weston-super-Mare attraction this weekend.

Waste contractor Biffa has been fined more than 550 times for performance failures in North Somerset.

A visit by TV personality David Frost and experiences of being in Doctor Who were featured in the Weston Mercury and Somerset Herald in 1968. Here is the news from that week.

A former GP surgery building in Worle will not be converted into a care home.

Hundreds of objections have been submitted against a scheme which would see a caravan park and swimming pool built on the outskirts of Weston.

A predatory paedophile teacher who filmed himself sexually abusing young girls in his Worle school classroom has been deemed 'suitable' to be moved to an open prison, the Mercury has learned.

A community-interest company committed to helping children play and learn about nature is raising money to re-open a Weston-super-Mare quarry.

A Worlebury radio enthusiast became embroiled in the invasion of Czechoslovakia by the Soviet Union.

Staff and volunteers at Weston Museum celebrated its first year of opening with a party at the weekend.

A clothes bank for unbranded school uniforms and PE kit has been set up by a Worle church ahead of the new academic year.

Four volunteers oversaw three houses being built and a roof repaired during a visit to Kenya.

A former Weston-super-Mare deputy headteacher has been jailed after he groomed children via Skype and viewed indecent images online.

The role North Somerset Council plays in the lives of children in care as they become adults is changing - and it is aiming to provide them with more opportunities.

Hundreds of people enjoyed the party atmosphere at a Weston park last week.

A charity model railway show will return to Locking Castle in September - and you could win tickets to go along.

Shopkeeper sentenced after illegal tobacco was discovered under shop counter

A Weston-super-Mare shopkeeper has been sentenced for selling counterfeit and untaxed tobacco.

Council could use compulsory purchase order to buy Birnbeck Pier 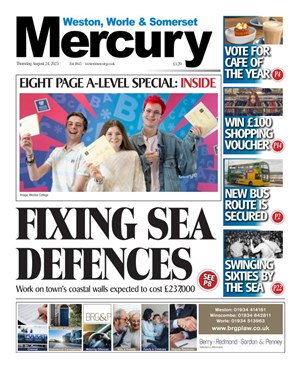